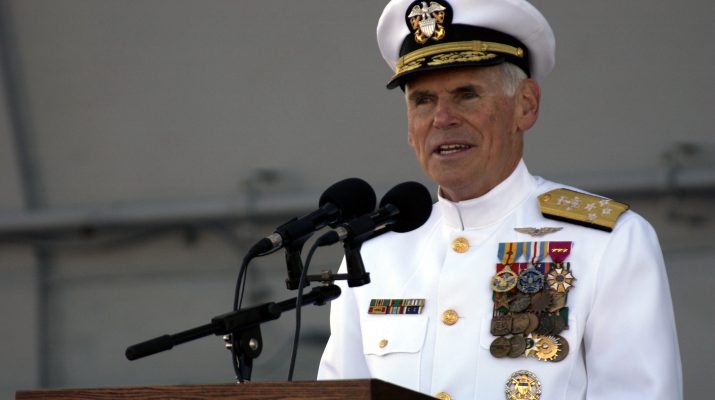 UWAJIMA, Japan — A U.S. Navy admiral held “heart-to-heart” talks Thursday with relatives of nine Japanese presumed dead after a submarine sank their ship, bringing a degree of closure to the saga of recrimination between the two nations and turning attention to raising the wreckage.

Adm. William Fallon’s emotional apology in the hometown of the Ehime Maru’s missing, who include four high-school students, appeared to assuage pain and left families with one chief wish: To retrieve the boat they fear has become the deep-sea tomb of their loved ones.

“He said he didn’t want to read any prepared texts but just have a heart-to-heart talk,” said Ietaka Horita, the principal of the Fisheries Training School that sent its students on the voyage that ended in disaster off the coast of the Hawaiian island of Oahu.

The presidential envoy’s visit with the bereaved went beyond a mere courtesy call and created a connection that, along with other expressions of contrition by U.S. officials, has done much to allay suspicion of the United States, according to those he met.

“We weren’t just reiterating our demands. We were sharing our feelings,” said Shoko Takagi, a relative of missing teacher Jun Nakata.

Fallon, the Navy’s No. 2 officer, told students at the fisheries school that they shared a “special bond” and said: “Don’t let this leave you afraid of the sea.”

“That was a wonderful thing to say,” Horita said.

Fallon met with 14 relatives of the missing, two teachers, and three crew members. The scheduled one-hour meeting was extended by 45 minutes to give him more time with the families.

Relatives said the meeting gave them hope of finding the bodies believed to be inside the ship, and giving them a proper burial.

“I came away feeling certain that the raising of the Ehima Maru will happen,” said Ryosuke Terata, father of one of the missing students.

The USS Greeneville rammed the Ehima Maru while practicing an emergency surfacing maneuver on Feb. 9. The ship sank within minutes.

Thursday was graduation day for about 50 of the school’s 200 students. Wearing dark blue jackets and huddling under umbrellas, they arrived at school in twos and threes. Some of the girls carried flowers.

After their meeting, school principal Horita said he thanked Fallon for his “sincere efforts.” Horita added he believes the United States is a nation that “cherishes justice, values, human rights and human lives.”

Over the past two days in Tokyo, Fallon apologized on behalf of President Bush to Prime Minister Yoshiro Mori and other political leaders and met with two fathers of the missing. He called on the local governor Thursday morning before coming to this village about 430 miles southwest of Tokyo.

Washington’s concern reflects the crucial importance it attaches to its security alliance with Tokyo.

About 50,000 U.S. troops are stationed here, including the largest contingent of Marines outside the United States. The United States maintains several major Air Force bases in Japan, and the home port of the Navy’s Seventh Fleet is just south of Tokyo.

Though strongly supported by both Washington and Tokyo, the troops’ presence is often a source of friction, particularly on the small southern island of Okinawa, where roughly half the troops are based.

The families got the apology they wanted most on Wednesday, when Cmdr. Scott Waddle visited Japan’s consulate in Honolulu and hand-delivered his written apologies to them.

Waddle, who according to reports here was born on a military base in Japan, cried as he handed over the letters.